a circle of Israeli dance critics announce, for the first time, their choice of best choreography and the most outstanding performance, premiered on the 2012-2013 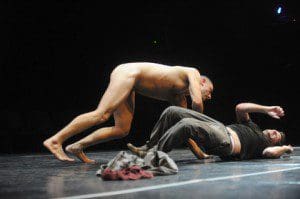 The initiative was embraced by Suzanne Dellal, which offered to host the event on international Exposure. The announcement of the winners and the critics' reasons took place Sunday, December 8, just before the last performance of the Israeli Ballet.

We believe it’s an opportunity to focus on quality dance in Israel, by independent, committed professionals, with no ties to public institutions or policy makers. This gesture is meant to promote attention to our dance makers, and prove that both choreographer and critics have at least one common interest, to remind everyone that dance can reach, touch, and enrich our lives.

For the first time, Israeli choreographers recognized and related to one of our short dance history's milestone. ( before Suzanne Dellal and arrival of Naharin to lead Batsheva).  In 1987 Nir Ben Gal and Liat Dror created 'Two room Apartment' which rattled the independent dance scene. The recognition they received after winning the Bagniolet competition, had started a process of empowerment of the local dance arena.  We found that the singular outlook of Sheinfeld and Laor's reconstruction, brought on stage a powerful creation which resonates their own voices. The way they maintained selected layers of references to their source, had stratified their own creation in a unique way. We already detect the reverberation of their approach in the field.o

Critics choice for outstanding creator is Hillel Kogan for his work: 'We Love Arabs'.   Hillel Kogan is bountiful, multi talented performer. This work culminates a consistent process of producing a line of works which reveals an involved, independent dance-thinker, which constantly challenges his audience, with his unique perceptions.  Kogan use intelligent and rather subversive texts which on one hand, force the viewer to look in the mirror and on the other, he sends pointed arrows toward the soft belly of out dance scene, as he dissects with grace and humor its prevailing conducts. No one escapes his sharp nicks, not even himself.  In 'We Love Arabs' Kogan brings complexity along clarity of purpose, where each move, word and performance tool are bound tightly in cohesive manner. The choreographic creation had unexpectedly found its equilibrium in carefully intuitive and rather unraveled structure.o

We also took an informal poll among a couple of dozen colleagues; critics, theater and festival directors abroad,

in order to try and follow Israeli dance abroad and try, out of sheer curiosity, to understand better the measure of their exposure.

We asked them which work by Israeli choreographer impressed them most in 2013.

We realize that, perhaps as expected, some Israeli dance-makers residing abroad enjoy higher level of exposure.  Since we do want to maintain ties between all of our dancers and choreographers abroad, and since our circle of dance critics' poll excludes them for obvious reasons, we wanted to salute them.

The names that repeatedly came up were in that order: Hofesh Shechter, Emanuel Gat and Sharon Friedman, and our own Ohad Naharin. Sharon Eyal, Sheinfeld and Laor along with Arkadi Zaides also scored well.