Israeli choreographer, musician and a former Batsheva dancer Hofesh Shechter, had moved to England and soon established a solid position on the international stage. His creation Grand Finale, (p.2017) is one of his more important works, following his rock-dance extravaganza ‘Political Mother’. 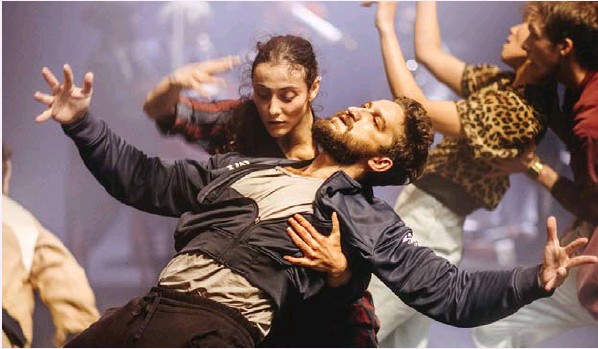 Shechter compose his own music , but for Grand Finale, he cooperated with Nell Catchpole and Yaron Engler. He and Engler also played percussion instruments on the powerful soundtrack, while a group of five musicians played live on stage classical music.

A synergy had developed between dancers, musicians and portable black overbearing wall-like panels, which influenced space and lighting in a unique way and furthermore, created an ominous ambiance around those gigantic floating tombstones. Those massive panels split and sometimes restrained the available space for the dance and musicians by moving around, popping in and out, in a way which affected the dance itself.

The dim lights and black shadows allowed for illusion games, which became emblematic for Grand Finale. Composed as a string of arbitrary fragments, the whole picture eventually made more sense, much like mosaic making technique.

A group of ten strong dancers functioned as a tight ensemble, executed the most challenging moves as they maintained impressive fluency while switching from chaotic compositions depicting violent social dystopia to almost regimented unified structures. The dancers kept an ease and loose body through rigorous and diversified movement’s lexicon which often included formats and kinetic components that derived from ethnic dance, yet energetically were stretched to the extreme.

There are still remnants ties between Shechter’s basic perception of the dancer’s body, and his past as Batsheva’s dancer, regardless of his singular artistic style.

Shechter uses variations on many components along the work, in order to solidify continuity by association. He also did so repeatedly by turning female dancers into lifeless raggedy dolls, handled roughly by male dancers acting as playing boys.

Yes, kinetically it was rather interesting, but in a work that basically avoided intimacy Shechter failed to contextualize this offensive attitude.

Grand Finale, like Shechter creations do, contained detailed craft, explosive energy, strong visual impact and a great measure of loud percussion music, although the earplugs given at the entrance were nor really needed.