A dozen pink and powdery blue balloons are tied together, anchored between the thighs of a dancer as she crosses the stage on four. Choreographer Yoram Karmi, artistic director of the Fresco Dance Company goes right to the heart of the core issue, and within the next hour, will dissect the ties between a person’s own perceptions pertaining to his or her gender and social expectations’ sphere as a result of it. 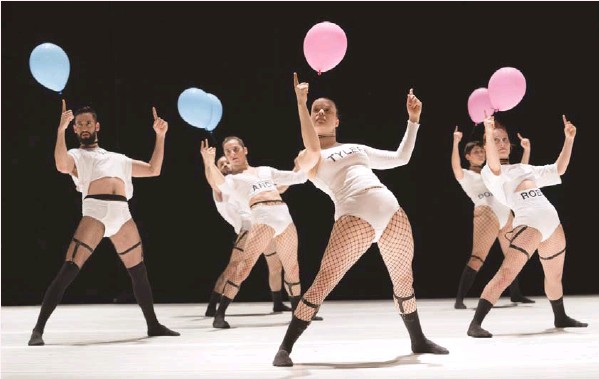 In a way, Genderosity celebrates an outlook post through the gay community’s lenses, a courageous stance which is made possible by the growing acceptance of gender rights and a higher tolerance for gender’s variety and complexity.

Karmi also took a risk by choosing blue and pink balloons, a cliché of its own, as a leading element with high visibility and constant presence, equal to that of the dancers. I believe he found 101 ways to use those props in ingenious ways, yet the more impressive ones were found in one unison section, when the balloons

hung high near the ceiling, and for a few moments formed an airy blue-pink cloud hovering over the heavier mass of the dancers below, echoing similar rhythms, as in a surreal dialogue.

Obviously, there was a lot happening as a result of interaction of dancers and their props, endless innuendos, explicit options, as well as more comical exploitation, done with imagination and ingenuity. The choreographer left no stone unturned in this study to deal also with human interactions, and loaded Genderosity with mosaic-like detailed work that will cover the central theme and its variations from all angles.

The Fresco dancers all look good, but the female dancers were stronger. Some were even better than that. This is the time to remind the company that the dancers’ names in the program are just as important as that of the designers.

Summing up the evening, one must see that Karmi managed to bring onstage a mixture of serious issues with some sensitive moments, along some wild dance celebrations, maintaining fine aesthetics, and never crossing over red lines.