"This thing with the GIBUSH here is very extreme in many aspects. I think it's because of the dance. The girls get to be very close to each other because it's a closed environment… Ya…it's the dance… hours together. Most of all, it's the physical closeness".

Tami is a 12th grade dance student at one of the three high-schools in the Tel-Aviv area, where I performed my ethnographic research during the years 2004-2006. She is one of many young women in today, who choose dance as one of major subjects in regular non-artistic high-schools. These dance students do their matriculation in modern dance, classical ballet and choreography, as well as in theoretical subjects related to the field of dance. In today there are more than 50 dance programs all over the country, in which the dominant population of students and teachers are females. 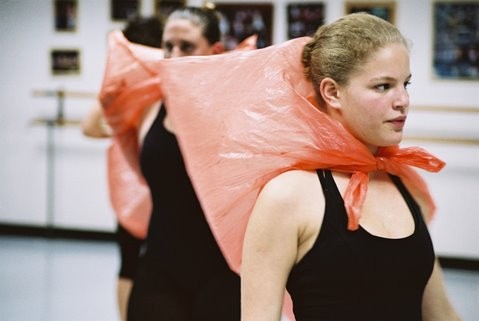 In her words, Tami uses the Hebrew term GIBUSH, translated by the dictionary (Morfix) as consolidation, unification, integration, and forging "team spirit".

However, in the Israeli reality, the term GIBUSH carries additional meanings and is defined by Israeli sociologist Tamar Catriel as a key symbol in Israeli cultural discourse. As such, it contains the essence of the famous narrative of Israeli togetherness (YAHAD), established in the early days of Zionism. The concept of GIBUSH acquired a status of a sacred norm and a code of behavior in Israeli society, especially in the arenas of education and the army. In formal and informal education, a well consolidated class or group is considered to be a 'good' group and a pedagogic social and learning success. In military life, it reflects the bond between masculine brotherhood, power and acts of bravery, along with a capacity to succeed physical and mental challenges. According to Catriel, this Israeli GIBUSH is characterized by an ideology and discourse of conformism and equality, stressing erasure of personal differences and emphasizing the common and the unified.

The term gibush caught my attention when it repeatedly appeared in many of the interviews I held with young female dancers as well as their teachers. The interesting thing was the clear connection they all made, as Tami did, between the moving body and what they described as a strong collective attachment and solidarity.

Indeed, in the context of early Zionism, dancing the Hora has been one of the main cultural practices symbolizing values and rhetoric of the new emerging state, through the collective moving body. Roginsky, (2004) and Almog, (1998) explain, how this famous folk circle dance emphasized the bond between the privet and the collective, and became an embodied site for the national ideology representing equality and unity. However, in the new millennium, dance programs in Israeli high-schools operate on a different cultural global platform, neglecting folk and national dance symbols, and concentrating on European and American theatrical dance.

What are the dance practices that construct this body group consolidation? How is individual uniqueness maintained in it? And what is the cultural meaning of this term Gibush in Israeli high-school educational arena?

This paper's argument is built around two claims: the first is that although the term GIBUSH, is indeed a key term in the verbal discourse of this cultural environment of high-school dance, its main location is in the non-verbal interactive moving body. This argument can work well for other sites of Gibush such as the army as mentioned above; the second is unique to the dance high-school scene and argues that although there are strong expressions of a solid collective consolidation within the dance groups, there is also evidence of an ideology of strong diversity and encouragement of each dancer’s uniqueness and individuality, rather then a demand for clear conformism.

Expressions of intense body interactions appear especially, but not only, in the girls' descriptions of choreography and composition classes, where methods of improvisation are dominant. They are also described in dancing together in unison in modern or ballet technique classes.

"Composition classes make us a strong group. It's all this contact improvisation that puts us in physical touch with each other and makes us feel the group… many times everything is done in a group, when we all dance or improvise together… We feel each other and that is what consolidates (=MEGABESH) us."

Ortal uses the word 'feel' twice in relation to two different practices. She feels others who are around her in the group through contact movement improvisation, and she feels others through doing the same movement at the same time, and being in sync with them. For her, feeling and sensing others through her body movement, becomes a dominant somatic experience and an embodied social interaction.

The case of the dancing girls illuminates that missing bond between the individual and the collective as body-interaction. It is especially interesting in the context of formal Israeli high-school education, where the body had been denied for decades and was removed to peripheral informal fields. The case also calls attention to the ways in which these two entities, the individual and the collective are constructed through the moving body

The body is perceived by the dancers as a private territory. Thus, Keren, a 10th grade student explains:

"All this thing with the dance is a body thing. Your body. Your body is a personal thing. If you work with your body next to other people's body, it brings you closer together. It's true. Yes… There is something very strong in it."

According to Keren, it is the private moving body as a somatic experience that connects people, functioning as a linkage, joining the individual and the collective to a sphere of intense closeness. Hence, dancing together, improvising and being in physical touch, are embodied sensual and emotional somatic practices. They produce, simultaneously, a strong sense of self as well as experience of that self with others. 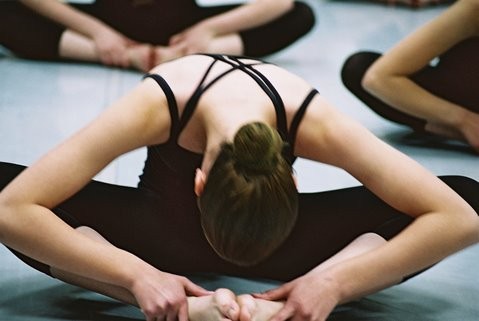 Looking back at Durkheim's work allows further understanding of the importance of somatic experience in the construction of social interaction. Although, dualistic in nature, as Durkheim saw the rational as above emotions, it is illuminating to see how his concepts reveal meaningful aspects of human embodied experience. For him, it is on the platform of the sensual and the somatic that emotional collectivity is created as social glue.

Durkheim's point of departure is the physical experience in action, which produces strong feelings and sensations of social attachment and solidarity.

in Elementary Forms of Religious Life he says: "we have to place ourselves within the sphere of action ". His kind of solidarity supported his functionalist vision which assumed a conformist model of a mechanical or organic solidarity.

Following Durkheim's mechanical model of solidarity, Catriel critically shows how the ethos of Gibush in Israeli education produces a strong assimilation between the social and the private, in a way that eliminates student's self-expression and individuality.

However, unlike Gibush in other social domains, the case of dancing high school girls shows that indeed, there is a strong sense of embodied collective experience among them which resonates also in their discourse. But, as I show next, at the same time, there is also an emphasis on enhancing each student's unique self-expression and identity.

This attitude comes clearly from the teachers as an ideology of seeking self-diversity and individuality, a practice of self-cultivation typical to the individual in late-modern society as defined by Giddens Beck, & Lash (1994), and others.

Sharon, one of the choreography and improvisation teachers describes how the moving body becomes a dominant site for production of a becoming unique dance identity:

"The process is very meaningful for the students. It's a process in which they can connect with themselves and get to know who they are. There is a different dimension which is the dimension of the body. Something very experiential and total that has to do with touch, senses and emotions. These connect between the internal-self and the body. The creative framework in movement allows great freedom, self-expression and a sense of individual uniqueness".

explains how through creative body practices of self-exploration, such as improvisation and self- expression in movement, the individual's identity is not only revealed but enhanced. The moving body becomes an investigation platform of the self, a mediator in the inter-action between that self and the individual. This practice of deciphering the self is well heard in Foucault's work [History of Sexuality (1976) and Technologies of the Self (1988)], where he talks about divers practices of 'taking care of the self', in order to establish and develop self- awareness and self-transformation.

For the young dancers, seeking the self through movement becomes a project of an inner-exploration and re- invention of that self through dancing.

"Many times we deal with how to express movement and let it out from our internal self… You feel that you have something of your own."

And Gili, her class mate says:

"Dance is not only interesting as can be any other subject in school. It connects you in a different way. It is to find your own expression to things. How you do it. How you express them… it's your own voice, which is in fact, your body…"

Hagar and Gili are seeking the self through body movement expression. Finding 'something of their own' gives them a sense of creation of an authentic-self. To them and to their teachers, this process produces their particular language of movement, also a sign of individuality and uniqueness.

In his book Mystical Society (2000), Wexler suggests after Foucault, that such self-work of the individual can be perceived as socially relational (as opposed to the modern politic of narcissism), in his words: "a self-renewal which is the premier site of collective action" (pp.48). Following Durkheim, who saw in otherness the source of energy of modern society, Wexler describes (In Typology of Reselfing) a process of emotional fusion between the self and the collective other, as, again, in his words: re-vitalization of mind, body and nature…instances of embodiment, imagination and reintegration" (pp.49-50).

In summary, a different process of Gibush is in action through the dancing body. It differs from the common Israeli high-school notion of Gibush described by Catriel, and from the national folk symbol of the Hora dance – both a Durkheimian functional systems of mechanical solidarity and conformism; this Gibush constructs a collectivity based on embodied individual diversity. The sensual action of dancing together produces directly and without need of verbal communication, strong social interactions; Improvising and searching for creative self-expression establish the moving body as an essential social domain, upon which new practices of re-creation of the self are defined.

Thus, the individual dimension while not being reduced for the unity of the group becomes an energizing force unifying the collective. Working through dance on re-creation of the self, contributes to the dynamics that enables a complex social texture to emerge between the embodied individual and the collective.

Hence, a new meaning is attributed to the famous narrative of Israeli togetherness among these young women dancers in high-school. In this age where society is described by social thinkers as Liquid and at Risk, (after Beck 1986, Bauman 2000, Castells 1996,7, and Giddens); and in this age of globalization, when Israeli society suffers from disintegration of institutional social structures, and public high-schools represent modern alienation and systems of social consumerism, the study of dance opens for teenager girls an opportunity for a creative and sensual embodied renewal of both the self and the collective. Dance becomes a rare and meaningful social practice in school, and creates a unique space for developing new patterns of life, seeking narratives of social unification; maybe a sign of what Wexler, Maffesoli and other progressive thinkers see as a vision of a becoming new society.

Beck, U. (2004) Risk Society – Towards a New Society, Sage Publications

Foucault, M. (1977) Discipline and Punish: The Birth of a Prison, Vintage Books a division of Random House Inc. NY

Maffesoli, M. (1996) The Times of the Tribes, Sage Publications, London